Thanks to the generosity of readers of this website, St John’s Orthodox Church in Colchester, Essex, opened on the weekend of 29/30 November. Services began on Saturday afternoon with the lesser blessing of the waters. This was followed by the Vigil service. On Sunday morning we celebrated the Divine Liturgy and all remarked on the astonishing beauty of the Church, especially the iconostasis, and also the quality of the singing, which is helped by the superb acoustics.

Altogether our appeal, which was launched ten months ago at the very end of January, raised £183,600. We heartily thank all our donors. May the Lord reward you all for your generous intentions through the prayers of our holy father John of Shanghai, Archbishop of Western Europe! 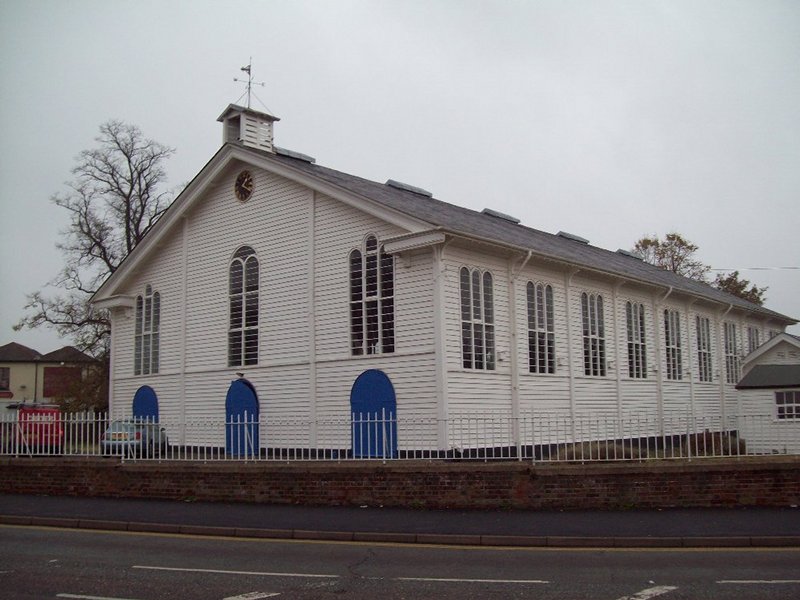 We remind readers of how the project developed.

Having launched our appeal in January, within the first month we had collected over £162,000. We realised that this was a viable project and that we could therefore submit a tender in March. On the eve of 6 May (St George’s Day) we heard that this tender for the former military Church had been successful.

On 15 May, we attended a planning meeting of Colchester Borough Council, where our application to alter the Church interior was accepted enthusiastically. On 30 August Vladyka Mark visited the new premises and once more gave his blessing to gather the scattered flock. On the leavetaking of the Dormition, 5 September, the sale of the Church was completed and so final payment made and the Church insured. 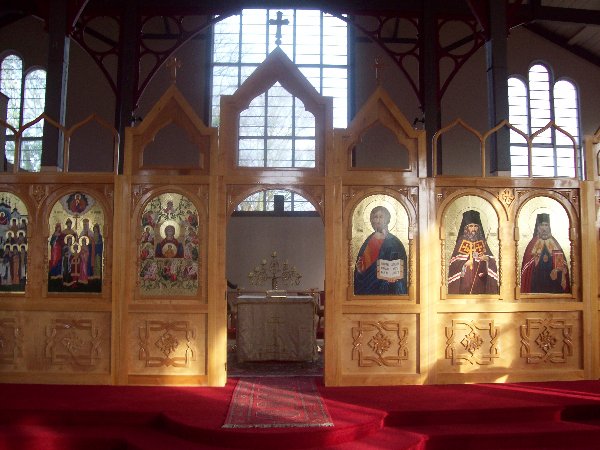 Between 8 and 12 September electricity and the water were reconnected and work began to adapt the interior of the Church. The painting of the Church hall, kitchen and office was completed on 24 September and the new raised altar area finished on 26 September. The gardens had been restored by 2 October and the Church clock repaired. The fire alarm was serviced on 8 October and the painting of the Church interior, chapel and meeting room completed on 13 October. Several parishioners took part, altogether using over 150 litres of paint. Each day several workmen were present, including two who pressure-washed the exterior of the Church. Their work took two weeks, ending on 15 October. This was the day when we had the privilege of welcoming to Colchester Archbishop Kyrill of San Francisco, the city where the relics of St John rest. His Grace was enthusiastic to see the Church and said: ‘God has given this to you for a reason’.

On 28 October we had the pleasure of welcoming Fr Sergei Shirokov from St Clement’s Church in Moscow. Fr Serge is an expert on Russian missions and has written a book on St Macarius of the Altai. Fr Sergei was enthusiastic about the missionary potential of the new Church. On 29 October we were again visited by a Lithuanian and Moldavian Orthodox who work for a charity called Keystone Development. They have many contacts in the region and told the many Eastern Europeans in the area about the new church. A priest and a choir, brought up in the Russian Orthodox Tradition, are very important to them. They fully understand that ‘Russian Orthodox’ means for all nationalities, not only for Russians.

On 29 October old carpet from the Church was relaid in the chapel and office and new lino was laid in the Church hall. On 31 October the team of carpenters finished work, having made several wooden furnishings and erected the iconostasis in the unique chapel, dedicated to All the Saints of Great Britain and Ireland. Our electrician, an old family friend, returned on 3 November to make final repairs. Several furnishings, including candlestands, a baptismal font, a second chalice set, a tabernacle, a seven-branched candlestick, an altar icon set and eagle-rugs, were received from Russia. Some of them were purchased by parishioners who paid for specific items through donations. 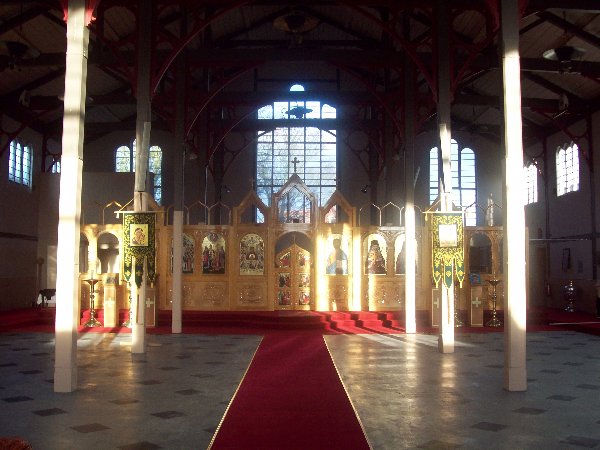 On 6 November the last painting was completed and the next day windows were fitted with locks. The floor of the Church was washed and scrubbed, everyone on their knees, on 10 and 11 November and fire extinguishers installed on 13 November. The gas was reconnected on 17, 18 and 20 November and a fire risk assessment report was arranged for 15 December. The main iconostasis finally arrived, after many temptations, from Kishinev on 20 November and was at once erected in its prepared place. The main icons had been painted, but others, as we already knew, will only be ready for Pascha 2009. The saints portrayed are those associated with St John, saints whom he especially venerated or who performed deeds similar to his own. These include the Royal Martyrs, the Optina Elders, St Nicholas of Tokyo, St Innocent of Alaska, St Nicholas of Zhicha and St Tikhon of Moscow.

The new carpet was laid in the altar area on 25 and 26 November, when the remaining icons and furnishings were moved from Felixstowe and fitted into their places. This was very hard and tiring work. 100 chairs were received on 27 November, 20 tables had already been received in October. In this way all was ready for the first services on 29 and 30 November. This was in time for the Feast of the Entry into the Temple of the Most Holy Mother of God on 3 December, the feast on which St John entered into his Cathedral in Shanghai in 1934 and again in San Francisco in 1962. On 9 December we hope to receive the two new large icons of Sts Cedd and Osyth, the two Essex saints, for the chapel dedicated to all the local saints.

There is considerable relief at our move. We had felt very insecure about our temporary rented premises in Felixstowe. By having permanent premises, the future of the Russian Orthodox Church in a large region of England is at last ensured. All local Orthodox should feel relieved. Over eleven years of renting were a financial drain and since few of our people lived in Felixstowe, people are glad to go to a larger centre of population. Colchester is a University town, with a much larger Orthodox population, far easier to access and nearer where some of our people live. 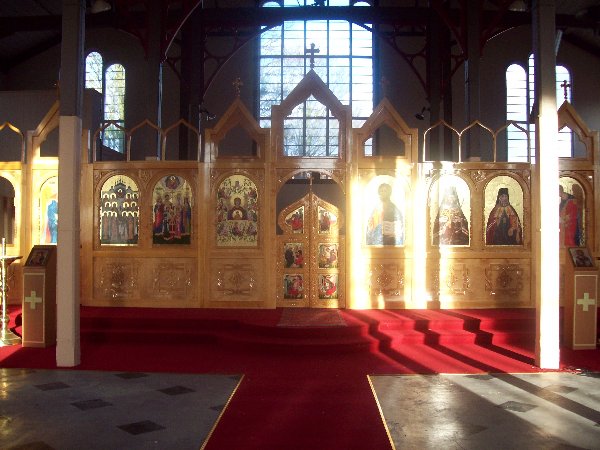 None of this was easy – it came after forty years of prayer and struggle for the multinational Russian Orthodox witness to take root in Colchester. We gain nothing without long-term effort and struggle against Establishment representatives who are often very negative towards authentic Orthodox Christianity. It was only through decades of struggles that this ‘mission impossible’ became possible.

Before the summer contacts were made with local Greek Orthodox and Anglican converts in the hope of co-operation. These were renewed at the end of October. This is only the fourth permanent Russian Orthodox Church in England, with two in London, one in Manchester and now one in Colchester. Locally, as the only Russian Orthodox Church covering east London, 40 minutes away by direct train and car, and the two counties of Essex and Suffolk, we shall continue to witness to the Orthodox Tradition. In this task we are actively supported by both dioceses of the united Russian Church and their local hierarchs, providing an example of unity to divided Orthodox in the region. 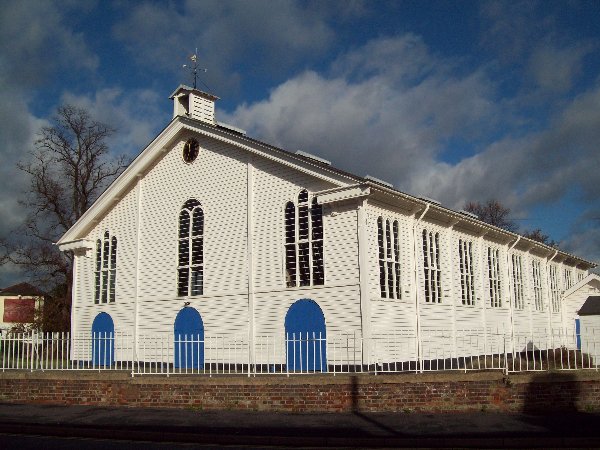