To the champion leader and good directress who guideth us to the heavenly Kingdom, come ye, let us who here have no continuing city all bow down, beseeching her all-powerful aid, recalling the miracles that from times past to this day have been wrought through her Icon; and let us cry out with a loud voice: Rejoice, O Sovereign Lady, who dost ever reveal signs of thy mercy unto the world!

That the grace of God is present in the world around us is clear to all believers, here in England as in all lands. Yet there are also special events which bring grace. Such are the interventions of the Mother of God in human affairs. Such is the extraordinary appearance of the Kursk Root Icon of the Mother of God over 700 years ago in faraway Russia.

In the late thirteenth century Russia was devastated by the Tartars. Thus the site of the town of Kursk (300 miles south of Moscow) had become a wilderness. Now it happened one afternoon in September 1295 that a man out hunting there noticed an icon lying face down at the root of a tree. Surprised, the hunter picked it up and saw that it was an image of the Mother of God of the Sign. From the place where the icon had been picked up a clear spring of healing water gushed forth. This happened on the 8th September, the Feast of the Birth of the Mother of God. With the help of friends the hunter built a small chapel and placed the newly-found icon in it. When news of this spread, many came to this chapel to venerate the icon and pray about their sorrows and needs. There the Mother of God healed all who came to Her with faith. 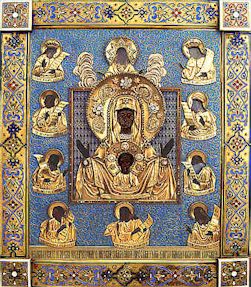 A local prince, hearing of the Icon, demanded that it be brought to him. With great solemnity it was carried to the town gates and a huge crowd gathered to greet it. Only the prince was missing, since, lacking faith, he did not consider it necessary to greet the Icon and was struck blind. Acknowledging his wrongdoing, the prince ran out to meet the Icon and publicly confessed his sin. He was healed immediately and promised to build a church in honour of the Birth of the Mother of God, which was done. However, it soon became obvious that it was not the will of the Mother of God that the Icon remain there. Each time it was in the new church, it was miraculously transported back to the now deserted chapel.

As the years passed, veneration of the Kursk Icon of the Mother of God grew. Thus a pious local priest often used to visit the chapel and hold services there, especially on the Feast of the Birth of the Mother of God, the anniversary of the Icon’s discovery. In 1385 Tartars again invaded the area. Finding the chapel in the woods where the priest was praying, they tried to set fire to it. Three attempts to burn it down were made, but to no avail. The Tartars were sure that the priest was putting out the fire by some sort of magic. When the priest explained that the reason for their failure was the miraculous power of the Icon, the Tartars took the Icon from the chapel and chopped it in half. One part they threw into bushes nearby, the other they carried a mile deeper into the forest and threw away. Then they proceeded to burn down the chapel and took the priest prisoner.

While in captivity, the priest did not lose heart. He resisted the efforts of the Tartars to make him renounce his faith, relying on the prayers of the Mother of God: his prayers were not in vain. Once, while the priest was tending sheep and singing hymns to the Mother of God, a group of Orthodox Christians overheard him and, paying his ransom, they took him home.

At the first opportunity the priest began to search for the Icon. To his great joy he found both halves of it close to the site of the burnt chapel. Placing them side by side, he was amazed to see that they immediately grew together, leaving only a fine line where the split had been. He hurried to spread the news and the Icon was triumphantly returned to the church. Yet again it miraculously travelled back to the place of its discovery. This happened several times and it was decided to restore the chapel in the woods, where the Icon remained for some 200 years.

Its fame spread far and wide in Russia and it became known as the ‘Kursk Root Icon’, as it had been found at the root of a tree. In 1597 it was solemnly brought to Moscow and met by a great multitude. The Icon was placed in a special gilt frame on which were depicted the Lord and the Old Testament prophets, holding scrolls in their hands with prophecies of the future conception and birth of Christ by the Holy Virgin Mary and prefigurations of the Holy Mother of God. Then the Icon was returned to Kursk and a large sum donated for a hermitage to be built on the site of its discovery. This was called the Kursk Root Hermitage.

On account of the dangers of renewed Tartar invasions, the Icon was transferred to Kursk. There it remained until 1615. In its absence, in 1611, the Tartars completely destroyed the Hermitage. The Icon was then taken to Moscow for safekeeping. A year later Kursk itself was besieged, this time by Poles. The townsfolk prayed fervently to the Mother of God, vowing to build a monastery in honour of the Miraculous Kursk Icon of the Sign in their city in case of victory. Their prayers were heard, for several townsfolk and captive Poles clearly saw the Mother of God with two radiant monks on top of the town wall. She sternly chased away the besiegers and as a result the siege was lifted. A monastery in honour of the Icon of the Sign was built and the people of Kursk urgently pleaded for the return of the miraculous Icon, for it was still in Moscow. In 1618 the Tsar agreed and also the Kursk Root Hermitage was rebuilt.

Many pages of history are associated with the Kursk Icon. Cossacks were blessed by it in 1676. By special decree copies of the miraculous icon accompanied armies and in 1812 people prayed before such an icon during the invasion of Russia by atheist revolutionaries.

In 1898 others tried to destroy the Kursk Icon by placing a huge bomb in the Cathedral of the Sign. They wanted the bomb to go off during the Vigil Service, thus killing many. However, the bomb went off during the night instead. Worried monks ran to the church and were shocked at the devastation. The gilded canopy above the icon was destroyed and the marble steps leading up to the Icon smashed. A massive cast iron door was torn off its hinges and thrown outside, where it had cracked an outside wall. All the windows were shattered. Yet, despite this, the Icon was untouched, even the glass in the frame was intact. The anarchists’ intent had been to ridicule the Icon, but in fact it was glorified all the more for this double miracle: the Icon had been preserved and no one had been hurt.
After the 1917 Revolution the Kursk Icon left Russia, surviving intact, and it accompanied those Orthodox who were fleeing the greatest persecution and martyrdom the world has ever seen, in which millions were slaughtered for their Faith. The Icon was carefully carried from place to place until 1927, when it was placed in Holy Trinity Church in Belgrade in Serbia.

During the Second World War Belgrade was bombed mercilessly. Whole quarters of the city were flattened and many were killed. Yet houses visited by the Icon of the Sign were miraculously spared. Air raids occurred during services, yet the Church of the Holy Trinity containing the miraculous Icon of the Mother of God was safer than any air raid shelter.

Sister Barbara, a nun from the Orthodox convent in Normandy in France, recounted this example of an amazing occurrence, told her by a Serbian soldier in 1941:

“Among us the Kursk Icon is greatly venerated. When this Icon visited our town, a miracle happened and was written down by members of the clergy. A great multitude had come to venerate the Icon. A wealthy man came in his car not to pray before the icon, but simply out of curiosity. Seeing the crowds of people, he laughed and said: ‘Such ignorant and uneducated people. They think that a mere piece of painted wood can work miracles!’

“He continued on his journey. The road went through the mountains, and was winding and precarious. On a particularly difficult curve, the rich man lost control of his car which slipped off the road and headed towards a precipice. Suddenly, before this faithless person, the image of the Kursk Icon appeared, as if alive. The rich man cried out in despair: ‘O Queen of Heaven, save me!’

“It seemed as if an invisible hand stopped the car which was about to be thrown over the cliff. The man carefully put the car into reverse and guided it safely back onto the road. He immediately returned to the village where the Icon was, fell down before it and with tears repented of his former unbelief. He placed a large candle before the Icon and began to tell everyone of the miracle which he had experienced.”

After the Second World War the Icon was taken to Germany, where it remained for five years, comforting the Orthodox flock all over Western Europe, wearied by the tribulations of the War. Then it was taken to America. Initially it was kept at a hermitage, but later it was moved to the purpose-built Orthodox Cathedral of the Mother of God of the Sign in New York City. Many believe that if this Cathedral and the area around it were spared in the terrorist attacks of 11 September 2001, it was because of the presence of the Icon there.

Today the Icon is taken from Orthodox parish to parish all over the world and its fame is international. It is known for countless miracles, healings and for assistance in misfortunes. It is significant that St John the Wonderworker (+ 1966), who was the Orthodox Archbishop in London in the 1950’s and was recently canonised by the Orthodox Church, passed away before this very Icon. How we should venerate this great and remarkable Icon! It is a well-spring of miraculous grace which is offered to us through God’s mercy by the Mother of our Lord, the Mother of all faithful Christians. For seven centuries faithful people have prayed before the miraculous Kursk Root Icon of the Mother of God and received help according to their faith. That its feast-day is the same as that of our own beloved Felixstowe Icon of the Mother of God can only draw us even nearer to cry out from the depths of our hearts:

Most Holy Mother of God, Save us!

Having obtained thee as an unassailable rampart and wellspring of miracles, O Most Pure Mother of God, thy servants quell the assaults of enemies. Wherefore, we pray to thee: grant peace to our land, and to our souls great mercy.

We thy people celebrate thy venerable Icon of the Sign, O Mother of God, whereby thou dost grant thy people a wonderful victory against their enemies. Wherefore we cry unto thee with faith: Rejoice, O Virgin, thou boast of Christians.

Come ye faithful, let us radiantly celebrate the wondrous appearance of the most precious Image of the Mother of God, and drawing grace therefrom, let us cry out with compunction: Rejoice, O Mother of God, Blessed Mary, Mother of God!