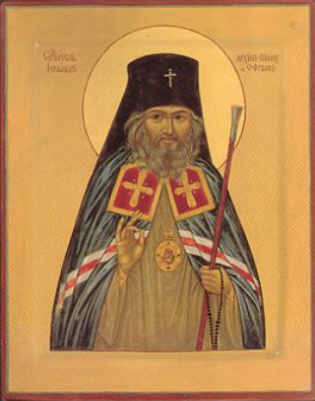 For twelve years, from 1950 to 1962, St John was Archbishop of Western Europe, with his see first in Paris, and then in Brussels. As such he was also responsible for the British Isles and, in particular, England. During this time he made several visits to London. The following has been recorded of those visits.

Vladyka John visited us in London. He usually visited us every year on the Dormition of the Mother of God, our Patronal Feast. Vladyka John was an outstanding personality. Everybody loved him and revered him, but not in an idolatrous way. It was rather a profound deference to his ascetic struggles and to himself, as one who of his own will carried on this spiritual struggle.

Vladyka John routinely visited churches of other faiths, where the grace of Orthodoxy might still manifest itself, especially in the form of the holy relics of saints who had been glorified before the Schism. Following this practice, Vladyka John expressed the intention of visiting Westminster Abbey. At one time it may have been a holy place. In spite of the devastation wreaked by Henry VIII, the Abbey had miraculously been preserved as a working church. Now, however, it no longer possesses the holiness it once had as an ancient church. Now people simply go to see it as one of London’s tourist attractions. Vladyka also went to see it, but after spending only a short time there, he left, saying: ‘There is no grace here’. It is true, there could be found the remains of famous English figures, of the country’s political founders, writers and scholars, but not of saints.

Here is yet another impression I had of Vladyka John. He was coming to London by train, from France as I recall. A group of clergy, the late Vladyka Nikodim, Archpriest George Sheremetiev and myself, met Vladyka at the railway station. At that moment a hunched-over old man came out of the station, wearing sandals on his bare feet, carrying a heavy icon on his chest, with clerical headwear slightly askew. Although he was not an Elder, he had the appearance of one, as if worn down by life’s concerns. V1adyka came out of the station and an Englishman, a simple man, said: ‘Now that is a bishop!’ He had felt a tremendous spiritual strength in Vladyka.

The late Mother Elizabeth (Ampenov) (+ 1999) of the Convent of the Annunciation in London recorded this:

Vladyka John was then Archbishop of Brussels and Western Europe and England was under his jurisdiction. On returning from a trip to England, he decided that it was there that we should settle. We received a visa and work permit for England without delay. Through his holy prayers and fatherly concern the first Russian Orthodox Convent, dedicated to the Annunciation, was founded in London. On leaving the Lesna Convent in France, where we had been staying, Vladyka John sent us off to our new life, saying: ‘You will be in a big city, but live as though you were in the desert’.

After many difficulties, a suitable building was found for accommodation. Having looked everything over, Vladyka said to me: ‘The sisters are from the Holy Land. They need heat. Make sure they have it at once!’ Central heating was installed, but we had an unfortunate accident: a workman broke the water heater tap and the whole kitchen and larder floor was flooded with boiling water. When Vladyka discovered this on his next visit, he asked for a service book and some holy water. He read a prayer over the boiler, sprinkled it all with holy water and prayed at length over the heater and electrical system. He asked us to hang up an icon of the Mother of God, the ‘Unburnt Bush’, over it. Since then, thanks to Vladyka’s prayers, everything has worked without a problem.

Whenever he visited England, Vladyka John always stayed with us at the Convent. He never lay down to sleep, but rather rested, sitting in an armchair in the office next to the church. At night we heard how he often used to go into the church.

Knowing that the sisters had all been pupils at the Bethany School in the Holy Land, Vladyka gave us his blessing to work with children, teaching catechism, Russian language and singing. Once Vladyka was at our Convent when lessons were under way. Among our pupils were some of their English friends. We introduced the children and they came up for a blessing. Surrounding Vladyka, they did not want to leave. Vladyka John was not very attractive outwardly, but even Non-Orthodox felt his spiritual grace, and, on leaving, the English children said: ‘You’re so lucky to have such an Archbishop!’ By Vladyka’s prayers we worked with children for over thirty-six years.

After visiting the churchwarden, Count Vladimir Kleinmichel, Vladyka declined to take a taxi, preferring to return to town by tube. The warden accompanied Vladyka to the station. As he was leaving, the ticket agent asked him whom he was seeing off. ‘That was our Orthodox Archbishop’, replied the churchwarden. ‘I’m a Baptist’, said the ticket agent, ‘but I can see that your Archbishop is a saint’.

During one of Vladyka’s visits to our community, there was a phone call from France, telling us that Archimandrite Serge had died. Vladyka asked that the funeral be postponed and said that he would return to France at once. Early in the morning we saw Vladyka off to the station by taxi. The young English cabbie asked if he could have a blessing. Vladyka turned around and blessed him. He then said to us: ‘What a wonderful, extraordinary Archbishop, he has a rare inner strength’.

At one time a Russian family from China were living in London. One night, the husband called me, frantic with anxiety. ‘For God’s sake, tell Vladyka John that my wife Olga is in hospital, critically ill. Her blood pressure has shot up very high, the doctors fear for her life as well as the life of our unborn child’. I called Versailles, hoping to find Vladyka there. He answered the phone, found out all the details, and then said not to worry, that all would be well. Afterwards, he thanked me for calling him. Through his holy prayers everything turned out fine, and a healthy girl, Katherine, was born.

A friend of our community, Paraskeva Dimitriu, lay ill in a coma. At our request, Vladyka John went to see her; he prayed and blessed her. That same day she got up, healthy, and with tears related how she had suddenly felt her illness leave her. Others told me that whenever Vladyka put his hand on their heads, they had felt the power of grace and felt light in their souls. Vladyka carried out the Lord’s commandments with self-sacrificing love and the Lord answered his holy prayers.

It was the feast day of the Dormition of the Mother of God, the Patronal Feast of the London Cathedral. When Vladyka returned to the Convent, we fell into a discussion about the celebration of services, and he mentioned, rather sorrowfully, that during the Vigil at the Cathedral no one had sung the stichiras of the eight tones. The nuns offered to sing them for him there and then. Vladyka listened, beaming. He often served at the Convent and brought us great consolation. He loved the singing of the nuns and valued a knowledge of the intricacies of the services. For the Feast of the Protection of the Mother of God, Vladyka John sent us a greeting, which we hung in our choir: ‘On the day of Saint Romanus the Melodist, crowned by the Lord for his enviable singing ability, I ask that you pass on my greetings to all the nuns and sisters, who work diligently for the Church and take part in the services through their singing. May the Lord bless them through His mercy for their diligence and hard work for the glory of Christ’s Holy Church. I call down the Lord’s Blessing on you, on all who glorify the Lord with their singing and on the whole Convent!’

By 1994 the Diocese in the British Isles was in dire straits and the Convent could not find any priest in England to serve for Christmas and Pentecost. I was called on in Paris to go and serve there. In conversation with Mother Elizabeth about the English saints and St John, then about to be canonized, I related how sad I was that I would be unable to attend his forthcoming canonization in San Francisco on account of my duties. As if in consolation, she told me the following:

When Vladyka John left us to go to America, he gave us the impression that we would never see him again. He told us: ‘I am leaving you now. I entrust you to the First Martyr of England, St Alban’.